How to Mount a TV on the Wall Without Studs 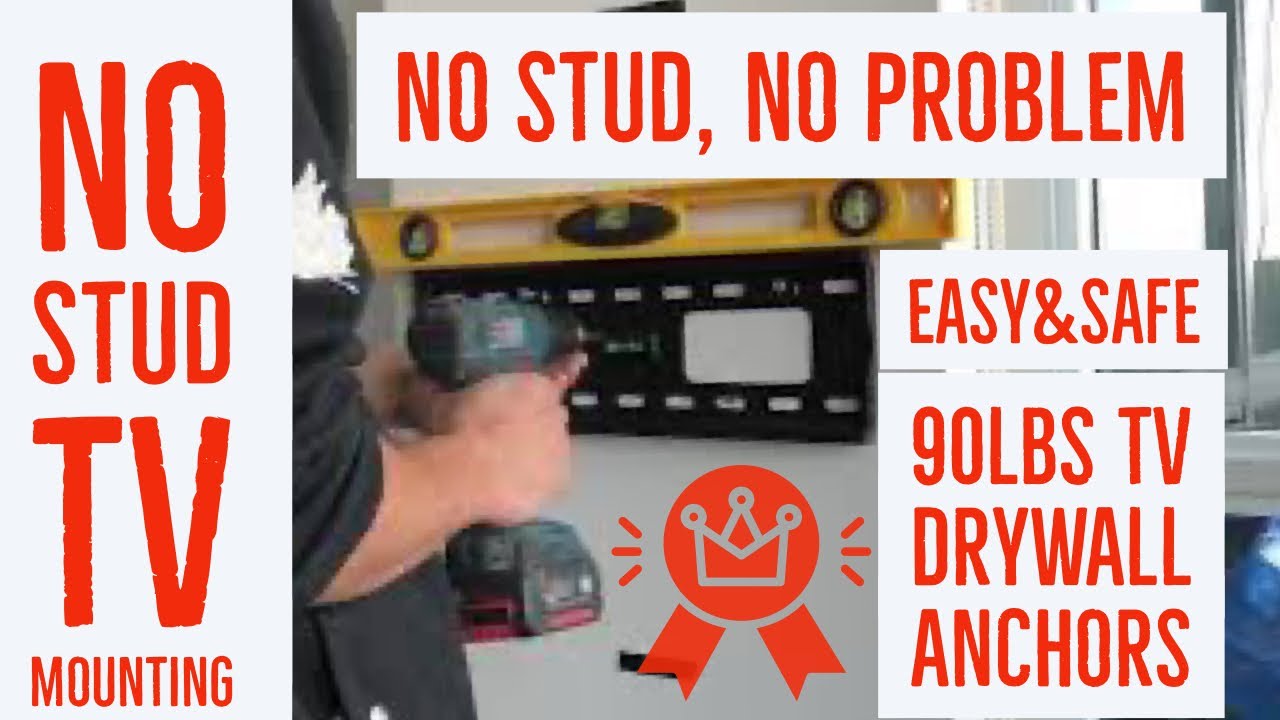 Unless you have the luxury of a stud-free home, mounting a television on the wall can be a difficult task. Depending on the strength of your walls, a drywall anchor or toggle anchor may be sufficient to hold the television securely. However, if your walls are made of wood or plaster, you should consider molly bolts or mounting plates.

Using toggle anchors to mount a television on the wall without studs is a common solution to mounting a TV on the wall. Some of these mounts can be attached to one stud or multiple studs, and you can choose the type of anchor that best fits your needs. To ensure the best possible installation, choose a mounting plate that offers additional support. You may also want to use a wall plate that is built into the wall itself.

Once you have chosen the type of mount, you need to mark the location for mounting the television. Make sure that it is level when viewed from a distance. If it isn't, you may need to loosen screws or reposition the television. To mount a TV without studs, you will also need toggle bolts, which you can purchase from a hardware store. If the mounting plate doesn't come with toggle bolts, you can cut them using a flush-cut saw or scissors.

Toggle anchors are also designed to hold heavier objects. They have a folding metal arm that you push through the wall and then tighten. When tightened, the metal arm expands and pulls flush with the inside of the wall, preventing the anchor from pulling through the hole and spreading the weight over a wider area. Some models are rated for up to 50 pounds, but be sure to check the wall thickness before choosing an anchor!

Toggle anchors work similarly to Molly bolts, except the toggle sleeve is replaced by the TV mount screws. When you have installed the toggles, you can then mount the TV on the plywood. When you're satisfied with the placement, you can install the TV bracket. If you have a heavy TV, be sure to have someone help you with the installation.

Be careful when selecting toggle anchors because the lengths of beams and joists are often different. Additionally, you need to consider the weight of the TV when installing the anchors. A 32-inch television can weigh as much as 30 pounds, so it is important to purchase studless anchors rated for that amount. And remember, you shouldn't use toggle bolts on full motion mounts because the constant movement is more stressful for the anchor points.

Molly bolts are screw fasteners that can be used to mount objects on the wall without studs. There are two different types of molly bolts: pointed and non-pointed. Pointed mollies need a hammer to install while non-pointed mollies require drilling holes in the wall. The point of a molly bolt is the point where the TV mount screw will go through the wall.

The downside to molly bolts is that they are more difficult to install than drywall anchors. But if you're not a DIY type, a pointed Molly bolt is ideal for mounting your television. The weight of a television can cause a lot of shear force, making it difficult to hold it with your hands. To compensate for this, engineers have devised a clever way to increase the anchor's weight. The result is a more stable fixing point and less likely to break the wall.

To install a molly bolt on a wall without studs, you need to drill two holes with a 5/16" diameter. Then, insert the molly bolt through the holes and tighten it. Make sure to use a hammer to tap it flush with the drywall before screwing the TV to the wall.

Once the drywall has been installed, you can attach the TV mount to the plywood using the proper screws. Make sure to tighten the screws before using them. You can also use toggle anchors, which look like regular screws, but have a butterfly toggle at the end. This type of anchor will attach to the back of the drywall and is a great option for a TV mount that's too heavy for studs.

Molly bolts are large metal bolts that provide secure mounting points for a TV mount without a stud. A mounting plate is made from aluminum, steel, painted plywood, or MDF and is secured to the wall using mounting fasteners or reaching framing. This is a very popular method of mounting a television without a stud.

Before you mount a TV on the wall, you must install mounting plates on the surface of the wall. These plates can be made of plywood or metal. Once installed, they are secured into the drywall with nails or anchors. You can remove the television once it has been mounted. You can also use mounting plates as additional focal points on the wall. Besides, they are wider than wall studs, so they allow for more anchors.

To mount the television on a wall without studs, first measure the weight of the television and the size. Then, determine the right anchors for the weight of the TV. To do this, you can search the Internet for the proper anchors and find a hollow spot. Mark the desired position on the wall and then attach the brackets. Once you have done that, the TV will be secured on the wall.

Another option is to use the toggle anchor. By using a toggle anchor, you can hang the television without the need to drill any studs in the wall. As a bonus, you can paint the toggle anchor to match the color of the drywall. Using mounting plates to mount a TV on the wall without studs is not a difficult and complicated process. But you must bear in mind that you should do some research before purchasing your mounting plates.

If you don't have studs in the wall, you can use the molly bolts. However, they are not as easy to install as mounting plates. Molly bolts are easier to install than mounting plates, but you should still consult a professional for help. These bolts are available in various sizes and grip lengths. Besides, mounting plates allow you to add more anchors if needed.

The problem with drywall is that it is quite brittle. It can easily break apart when the weight of the TV is put on it. But using a wall stud will provide a stable anchor point, so the drywall won't crumble. Even if it isn't anchored, you can still mount the drywall without studs. But you must know the load capacity of the anchors and the weight of the tv.

Before you begin mounting your television, it's important to make sure there are no studs in your wall. If you are renting, you may not be able to use drywall anchors. If this is the case, check with your landlord or rental property manager to determine whether you can mount your television without violating their rules. In either case, you will need to choose the correct anchors and make sure you mark the hole for the television.

Another consideration is whether or not the drywall is load-bearing. If the drywall is crumbling and you're worried that the anchor will pull the TV out of place, you may want to consider mounting an alternative to drywall. Additionally, you should also consider the weight of the TV. Different models of televisions weigh different amounts, so you may have to compromise on the size of the screen.

Molly bolts are another option for mounting a TV on the wall without stud-studs. Molly bolts are much stronger than ordinary drywall anchors and are intended for medium to heavy loads. Molly bolts come in two varieties: pointed and non-pointed. Pointed ones are easy to install with a hammer, while non-pointed bolts need a hole to be made first.

A mounting plate and drywall anchors are the most common tools you need to mount a television on a wall without studs. Anchors should be rated for the weight of the TV so that the mounting plate will stay in place while you do the rest. As a final consideration, you should check with the landlord before hanging anything on your wall. You may also need to seek permission from your landlord if you rent a property.

To mount a television on the wall without studs, you can use drywall anchors instead of bolts. You can buy drywall anchors in a hardware store near picture hanging hardware. Choose the correct one for the weight of your TV. You can use one of these anchors with a fixed mount, or you can have a professional do it for you.