How to Remove TV From Wall Mounts 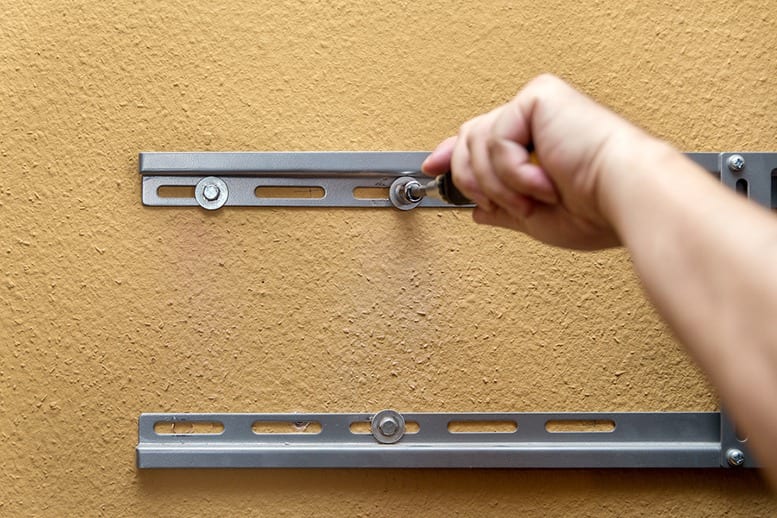 The next time you're thinking about removing your television, you've probably wondered how to remove TV from wall mounts. In this article, you'll learn how to remove your tv from a wall mount, whether it's a bar lock, pull-string lock, or screw-lock. First, you'll need to remove the locking mechanism. This may be difficult if the TV is mounted to a wall that has a pull-string or bar lock.

Dismounting a tv from a wall mount

If you have a column TV mount, it will be easiest to remove. A pillar mount is the type you'll want to use, as it features a square or circular pillar. There are three common locking mechanisms used on column TV mounts, and we'll cover each one. Using a screwdriver, loosen the screws and unplug all wires. Then, tilt the TV backwards and set it down on a flat surface.

Once you've loosen the screws and are ready to remove the TV, lift the TV off the mount. Make sure that you are in a position to grasp the television and lay it face down on a blanket. If you're unsure of how to lift the television from its mount, you can also consult the owner's manual for the particular wall mount. You may be able to find instructions on how to remove a television from a wall mount on the manufacturer's website.

Once you've removed the TV from the wall mount, you'll need to remove the wall-mounted stand and move it to a new location. By following these steps, you should be able to remove the TV without causing any damage to the TV or the wall. If you're moving the TV, you might need to borrow a screwdriver or hire a friend to help you.

Taking a tv off a bar lock

Taking a television off a wall mount can be a tricky process. These mounts are usually made of two parts: a wall-mount bracket and a TV-mount safety lock. Once you've unplugged the TV from its wall-mount bracket, you'll need to remove all of the screws on the TV's mounting bracket. This step may require a 12-inch screwdriver. After the screws are removed, carefully lift the TV from its wall mount. Ensure to place a soft surface underneath the TV to prevent scratches.

Some TVs are attached to a horizontal locking bar. This bar will often run from left to right. To remove it, lift it vertically and then pull the bottom of the television away from the wall. Some wall mounts have a tilt and articulated motion that make this difficult to access. To make it easier to reach, take a flashlight and a long-handled screwdriver.

You'll need a screwdriver and a soft blanket to remove the mounting bracket. You may also need an Allen wrench. Unscrew the four screws on the TV mount and tilt it gently towards you to release the horizontal bars. If you're working with a screw lock mount, a Phillips or cross-head screwdriver is typically sufficient. If you're working with an Allen wrench, you'll also need a longer screwdriver, as some models may require a Phillips or cross-head type.

A pull-string or bar-lock safety lock is typically easy to unlock. If you've tried to take the TV off a bar lock yourself, you'll need help. Pull-string locks are easy to unlock because they're secured on both sides with strings. For bar and screw locks, you'll need an additional helper to help unlock the mount. If you're unable to find help, you can try to take it apart with a hammer and a pair of pliers.

Taking a tv off a pull-string lock

You can also loosen a screw lock on a television by lifting the device vertically. If the TV is free, you should hear a pop, and then tilt the bottom of the TV toward you. Some wall mounts may be difficult to reach, and you'll likely need to use a long screwdriver to release the safety lock. However, these simple steps will help you remove a television from a pull-string lock on your wall mount.

To remove a TV from a pull-string mount, first unscrew the locking screw on the TV. To do this, tilt the TV toward you to disengage the gravity hooks that hold it down. Next, lift the TV to free it from horizontal bars. In addition to a screwdriver, you may need an Allen wrench of various sizes. In case of screw lock mounts, you may need a Phillips or cross-head screwdriver that's at least 10 inches long.

Taking a tv off a screw lock

If you're having trouble taking your TV off the wall, you may be having trouble taking it off a screw lock. There are a few steps you can follow to remove the screw lock and get your television off the wall. You can use a screwdriver or flashlight to locate the screws. After you have loosened the screws, pull the TV away from the wall. If the screw lock is a pull string one, it will have two strings attached to a latch. Pull hard on the strings to release the TV from its wall mount.

First, you should look for any screws that have been attached to the mount. You can find the screws on the sides or under the television mount. If the screws are on the sides, you can use a family member to hold the TV steady as you work to remove the TV. To remove the lock, you'll need to lift the TV off the mount and slide it to the floor. You can also take the old type of wall mounts off the wall, which have a tray-like frame. They are still available in some hospitals and motorhomes. These TV mounts are usually attached to the wall with Phillips-type screws, so you'll need a screwdriver that fits this type of mount.

Unscrewing a television from a screw lock mount is not that difficult. You just need to know what to look for in order to remove it from the wall. You'll need to research the type of mounting system you have to ensure you're safe. Some mounts require tools like Allen wrenches, screwdrivers, and socket sets. You'll also need to be careful not to damage your television.